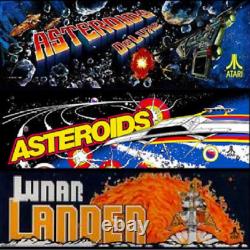 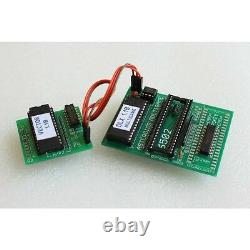 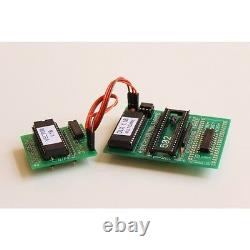 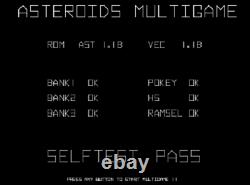 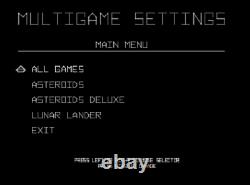 This is a kit to add to your ORIGINAL arcade pcb. This DOES NOT work on a Raspberry Pi, Arcade 1UP, a MAME computer, or any other thing except your ORIGINAL pcb. This is NOT a stand alone game board. This is an ENHANCEMENT kit.

This is a daughter card that fits into the processor socket. This kit adds functions like free play, attract sounds and more!

The Asteroids Deluxe Multigame is an add-on enhancement kits that extend your Asteroids Deluxe game board to play all 3 games: Asteroids, Asteroids Deluxe, and Lunar Lander. As with all Braze Technologies multigames, these kits are loaded with features such as high score save, on-screen settings configuration, and enhanced diagnostic selftests. Switch between games at anytime by simply pressing both start buttons at the same time. Check out the Lunar Lander info page for a detailed description of how Lunar Lander is mapped on to the Asteroids Multigame.

Additionally there is a Multigame FAQ for commonly asked questions and instructions on how to use the multigame kit. The Multigame kit comes in two models. One for Atari Asteroids boards and a different version for Atari Asteriods Deluxe boards. This multi kit is for an Asteroids Deluxe pcb. Kit installs in minutes on your Atari Asteroids Deluxe boardset. No soldering or special skills needed. Simply remove a few socketed chips and plug in the kit. It doesn't get much simpler than this! See detailed Installation Guide and Trouble Shooting Guide. Switch between games at any time by pressing and holding both start buttons at the same time. Game will instantly switch to the next game in the sequence. No additional switches are needed. This kit contains special code modifications derived from the Asteroids High Score Save Kit allowing scores up to 9,999,990 instead of the original 99,990. No more losing your high score when you roll over the 100K mark. The on-screen interactive setup menu provides access to configure game play settings separately for each of the games including resetting of the high score tables.

No need to fiddle with DIP switches anymore. Transfer your existing Asteroids high scores. If you currently own the Braze Technologies Asteroids High Score Save Kit. You can transfer the high scores from that kit to the multigame kit using a simple procedure of moving a single chip from one kit to the other.

Daughter cards snap firmly into place. Top 10 high scores and initials for Asteroids and Asteroids Deluxe are remembered permanently, long after the game has been powered off.

No batteries to replace ever. Note: Original Asteroids did not save any scores and original Asteroids Deluxe only saved the top 3. There is no high score saving for Lunar Lander. Easy to clear out the high scores when desired. Simply put the game into testmode, follow the instructions to get into setup mode.

From there, select the high score reset option for the desired game(s) and exit out. Improved selftests and diagnostics including new sound tests, new input tests and enhanced memory diagnostics.

In that revision they added a DIP switch setting allowing selection of the original (hard) gameplay or the new (easy) version. This kit is based off the 2nd release and allows selection of EASY or HARD gameplay via the setup menu. See Asteroids Deluxe Revision 2 release (jpg).

Fixes the Asteroids "missing last letter on the 10th score" bug. There is a bug in the Atari REV2 code whereby every time you start a game, the last letter (initial) in the 10th score is erased. The modified software on this kit fixes that errata. The Lunar Landing implementation on the multigame gives visual feedback on the screen when selecting the mission type. All 3 games have improved free play.

Minnesota has recent rate changes (Mon Apr 01 2019). Please give us a chance to resolve any issues before posting any feedback. We back our products with a 3. Please return in the original condition as it was received.

If your order arrives incorrect or the package is damaged in result of a carrier company, you must notify us within 72 hours of receipt. We cannot be responsible for lost or damaged packages you send.

Sometimes, things are going to go wrong. No matter how much you plan for perfection, at some point we are going to disappoint a customer because of something that we could have prevented. When this happens, we own it.

Even better, we try to out the issue before you the customer even notices it. As the saying goes, mended fences are often stronger than those never tested at all. If your customers experience is not going above and beyond or we seem to be ignoring an issue, let us know ASAP! We will win your loyalty.. The item "Asteroids Deluxe Multigame Free Play & High Score Save Kit Plays 3 arcade game" is in sale since Friday, June 23, 2017.

This item is in the category "Collectibles\Arcade, Jukeboxes & Pinball\Arcade Gaming\Replacement Parts". The seller is "highscoresaves" and is located in Minneapolis, Minnesota.